Geothermal Energy - Hydraulic fracturing at the European HDR test site Soultz-sous-Forêts (France): The HDR/HFR (Hot-Dry-Rock, Hot-Fractured-Rock) technique allows the extraction of heat from deep crystalline rock by circulating fluids through an underground heat exchanger which is formed by a hydraulically stimulated fracture system. During the last 10 years massive hydraulic fracturing tests have been performed successfully at the European test site Soultz. By injection of water at high rates and pressure, large fracture systems could be generated in the crystalline basement between 3 and 5 km depth. A clear understanding of the hydro-frac process is necessary for the development of more efficient stimulation techniques in order to achieve higher flow rates and larger fracture surfaces.

Thus, a conceptual model for hydraulic fracturing is proposed which has been developed based on hydraulic and seismic observations. It is assumed that the hydro-frac process creates tensile artificial fractures within or between natural faults and major fracture zones. The opening of artificial fractures during hydraulic stimulation leads to irreversible shearing along the natural faults. The stimulation experiments at Soultz revealed that a self-propping mechanism kept the fractures open. This observation is attributed to the shearing mechanism. Preliminary results from analytical and numerical model calculations confirm the validity of the conceptual model (Fig. 1). 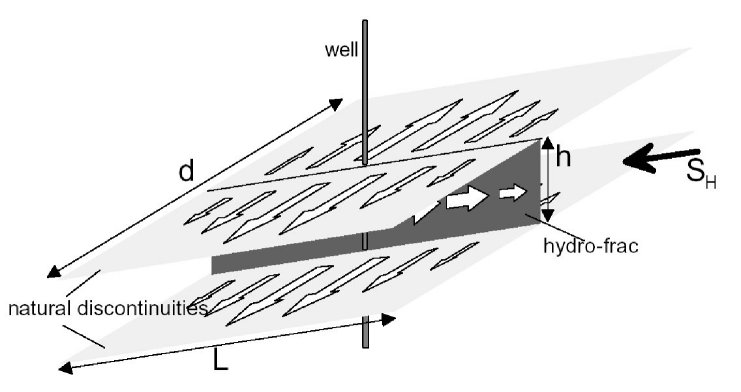 Fig. 1: Proposed conceptual model of hydraulic water-frac stimulation in a crystalline rock mass: During the hydro-frac process, a tensile artificial fracture is created within or between natural fracture zones. L is the fracture lengh, h its height, and d is the penetration depth of the pressure front into the fault zone. From: R. Jung and R. Weidler: A Conceptual Model for the Stimulation Process of the HDR-System at Soultz, Geothermal Resources Council Transactions, 24, 143-147 (2000)