Analysis and interpretation of well level changes induced by the Roermond earthquake of April, 1992: On April 13, 1992, a MW 5.4 earthquake occurred near the city of Roermond, the Netherlands, in a focal depth of about 17 km. This so-called 'Roermond earthquake' was the strongest event in Central Europe since 1756. Following this earthquake, the water levels of numerous wells located in the Lower Rhine Embayment showed significant coseismic anomalies. For the period of March to May 1992, we collected records of altogether 189 continuously operating well level sensors. After deselecting signals that were most likely triggered by instrumental effects, 59 data sets were kept that showed significant earthquake-induced dynamic or step-like responses of cm amplitude. Advances in understanding these phenomena may improve the knowledge of the role of pore fluids in crustal rheology, and are essential for the study of hydrologic earthquake precursors. They are also of some relevance for the assessment of risks of toxic waste disposals, and for matters related to the production of hydrocarbons. In order to explain the observations, two potential mechanisms were investigated: the poroelastic response of the well's vicinity to the static volume strain field of the earthquake and discrepancies in local pore pressure in the context of changes in hydraulic aquifer properties, released during the passage of seismic waves.

A coseismic strain imposed by an earthquake is expected to result in a step-like well level change. In a simple, linear model, water levels fall or rise depending on whether the connected aquifer expands or contracts in response to the seismogenic redistribution of the regional strain field. The static volume strain field of the Roermond earthquake, derived from analytical model calculations for both a point- and a finite rectangular source in a homogeneous half-space, is in reasonable agreement with the sign of the observed well level steps (Fig. 1), but the step amplitudes predicted from the theory are much smaller than those that were recorded (Fig. 2). Accordingly, quasi-static poroelastic deformation described by simple linear models of the crust fail to explain these observations.

As an alternative approach local pore pressure effects which are independent of the earthquake's focal mechanism were investigated. A spatially heterogeneous distribution of pore pressure in the vicinity of a well's screen to some extent may equilibrate from ground shaking. This may cause significant step-like well level responses as well (Fig. 3). Numerical finite element model calculations using the FE-program PDE2D demonstrate that pore pressure diffusion processes following atmospheric pressure changes could generate a spatially heterogeneous distribution of pore pressure in a fluid saturated aquifer. Adopting changes in barometric pressure of 10 to 20 hPa and an equilibration of order several tens of percent of the pore pressure heterogeneities well level steps of cm-amplitude can in fact be expected.

Although, the described mechanism can account for the amplitude and persistence of coseismic well level steps, the zonation that was found to be in agreement with the earthquake's static strain field can not be explained by the suggested local pore pressure phenomenon. In summary, the exact mechanism of hydrologic anomalies due to earthquakes remains speculative. Other case studies and model calculations, preferably based on data from confined aquifers and obtained by pressure transducers rather than floating devices appears to be needed. 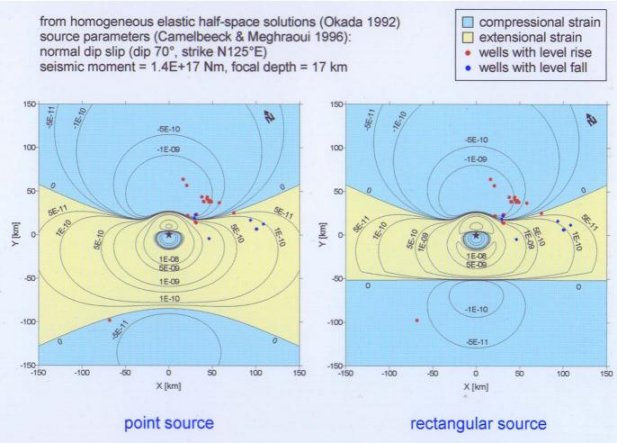 Fig. 1: The static volume strain field of the Roermond earthquake (300 x 300 km) as calculated for a point (left) and a finite rectangular source (right) in a homogeneous half-space. The epicentre of the earthquake is indicated by a star; the x-axis is chosen to be parallel to the strike direction of the rupture area. The strain values are shown near the contour lines. The signs of the steps (indicated by red and blue circles for rising and falling well water levels, respectively) are in good agreement with the areas of compression and extension. 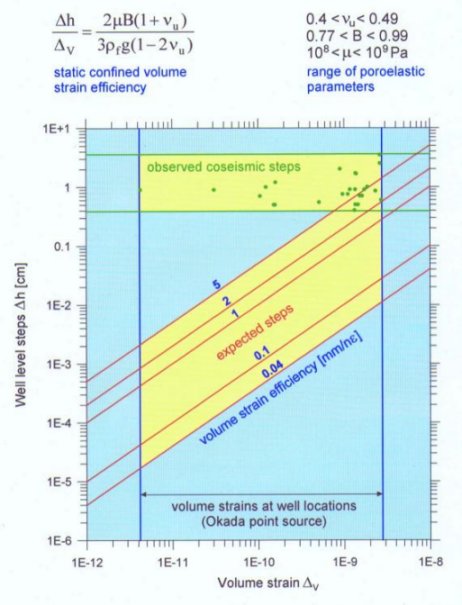 Fig. 2: Calculated volume strains (cf. Fig. 1) at the well locations versus observed (green circles) and expected (red lines) coseismic well level steps. The expected steps were obtained for different volume strain efficiencies using the above equation and the indicated range of poroelastic parameters. The calculated amplitudes of expected steps are much smaller than the observed amplitudes. Consequently, the observed coseismic steps might not be explained by a poroelastic response to the static volume strain of the earthquake. 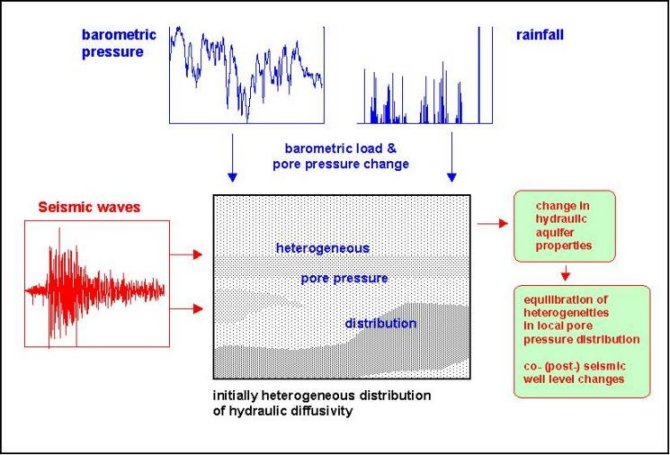 Fig. 3: Idea behind the numerous model calculations: An aquifer region which is described by a heterogeneous distribution of hydraulic diffusivities is exposed to changes of barometric pressure and/or rainfall. These meteorologic effects may cause significant heterogeneities in the initially homogeneous pore pressure distribution within the aquifer. These heterogeneities may equilibrate during the passage of seismic waves which may result in significant step-like well level responses. The model calculations describe the build-up of pore pressure heterogeneities due to step-like changes in atmospheric pressure, and not the process of wave-induced equilibration.